Chimamanda Ngozi Adichie wears lip gloss. She likes girly skirts and high heels. She does not hate men, and yet she talks feminism. Very beautifully, witty and rousingly. In her book “We Should All Be Feminists,” this Nigerian writer, who divides her time between the United States and Nigeria, invites us to dream and start creating a fairer world, a world of happier men and happier women through the medium of feminism.

“Why the word “feminist”? Why not just say you are a believer in human rights?”

I got enchanted by Chimamanda Ngozi Adichie’s deep poetic voice the first time I heard her much-admired TEDx Talk “We Should All Be Feminists”. Her book adapted from this talk is similarly melodic and easy to follow.

I was expecting it to be mainly about women but Chimamanda is also looking at the way we raise boys:

“We do a great disservice to boys in how we raise them. We stifle the humanity of boys. We define masculinity in a very narrow way. Masculinity is a hard, small cage, and we put boys inside this cage. We teach boys to be afraid of fear, of weakness, of vulnerability. We teach them to mask their true selves because they have to be, in Nigerian-speak, a hard man.”

As a mother of a boy, I wonder what kind of world my son would live, and I dream that this world would be based on equality, love, and inclusiveness for girls, and for boys.

Chimamanda shares that the reality today is still different. She makes an argument that the expectations we have of both genders are rather contributing to a gender divide.

“All over the world, there are so many magazine articles and books, telling women what to do, how to be and not to be, in order to attract or please men. There are far fewer guides for men for pleasing women.”

Chimamanda Adichie offers many examples of gender injustice, but the tone of her book is not accusing. In her essay, the author explores the ways to have a better future without being put into gendered boxes.

“So I Decided I Would Now Be A Happy African Feminist Who Does Not Hate Men.”

Have you ever hesitated to call yourself a feminist? Do you feel that this word has a negative connotation? Did you happen to talk to people who make feminism sound like something bad?

There are still enough places where the word “feminist” is frequently used as a defamatory word. This term is easily associated with unattractive women who do not bother to find a date, do not use deodorant and do not shave legs.

Even in Western countries, women may shy away from being called “feminist” – they do not want to be perceived as butch who do not have good relationships and hate men.

The first time Chimamanda heard the word “feminist” from her dear and very close friend Okoloma in Nigeria, she felt that it wasn’t a compliment.

“He told me that people were saying my novel was feminist, and his advice to me – he was shaking his head sadly as he spoke – was that I should never call myself a feminist, since feminists are women who are unhappy because they cannot find husbands.

So I decided to call myself a Happy Feminist.”

Chimamanda shares that once, an Academic Nigerian woman suggested that her feminist ideas were “un-African” and influenced by Western books.

The writer was amused because much of her early reading was decidedly “unfeminist,” moreover when she later got to read the “classic feminist texts” she was getting bored and struggled to finish.

I can recount a similar experience.

Some time ago, when I was finishing High School in the South of Russia, I was enjoying an exciting discussion about relationships between men and women with one of my best male friends when he said that the things I was saying sounded “feminist,” his tone conveying that “feminist” was something negative.

Only a few years later, when I got accepted for the program of International Media and Cultural Studies at a UK university, I found a welcoming place to freely talk about the ideas of feminism as radical as we wanted.

“I want to be respected in all my femaleness. Because I deserve to be.”

Even in Western societies, when a waiter brings a check to a couple, it is not unlikely to be handed to a man. In some places, argues Chimamanda, men may even get thanked for the money a woman paid because it is assumed that the money comes from a man anyway. We are so used to these trivial facts that we hardly acknowledge them.

The author shares stories from everyday life happening in the US, in Nigeria and other parts of the world.

Sometimes they are about big things, such as payment gap between men and women, but often she tells us about little things, the little things that are seemingly not a big deal but make women feel invisible and less considered.

Why should a woman’s success be a threat to a man’s?

The definition of “feminism” Chimamanda found in a dictionary turned out to be neutral and unthreatening: 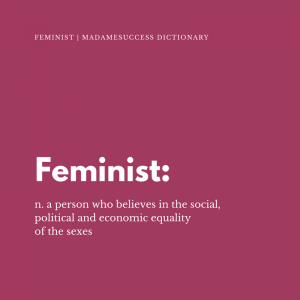 Continuing her exploration, Chimamanda Adichie comes up with her unique definition of feminism, one rooted in inclusion and awareness.

She elaborates on ideas how to change our attitude and get rid of the weight of gender expectations.

The book has fewer than 50 pages; it is a very quick read, but it is a read that can make an impact and change our life. 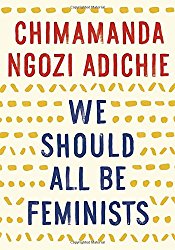 In 2015 the Swedish Women’s Lobby and publisher Albert Bonniers launched the campaign in Sweden to give a copy of Chimamanda Ngozi Adichie’s “We Should All Be Feminists” to every 16-year-old in Sweden.

The organizers said they hoped the book would “work as a stepping stone for a discussion about gender equality and feminism”.

We live in a world that too easily puts people of different background against each other. We want to act for the opposite.

It could be an example to follow for all of us, women and men in every country.

“Gender matters everywhere in the world. And I would like today to ask that we should begin to dream about a plan for a different world. A fairer world. A world of happier men and happier women who are truer to themselves. And this is how we must start: we must raise our daughters differently. We must also raise our sons differently.”

The world, Chimamanda asks us to start dreaming of, feels like the world we all would like to live. It feels like a loving and friendly place for our daughters, and for our sons.

Chimanada Ngozi Adichie “We should all be feminists” can be ordered at Amazon and Pinguin Random House. I purchased it at The Last Bookstore in Los Angeles, CA.

Chimamanda Ngozi Adichie: grew up in Nigeria. Her work has been translated into thirty languages. She is the author of award-winning and bestselling novels, including Purple Hibiscus, Americanah and Half of a Yellow Sun, and the story collection The Thing Around Your Neck.